As an Synchronous LED Controller, it always has the video port (usually in DVI type) for gather the video signal. And several signal port for connect onto the screen, which usually looks like the ethernet port.

As a PCI card

Most common controller looks just like a PCI card of X86 PC. And it does usually been installed inside the PC.

Sometimes the LED controller was installed in a box. There will be a power adapter inside this box. So you can power up the controller by connect an AC power cable onto the box directly. In this case you don't need a desktop PC to plug the card, but just connect the video signal onto this controller. 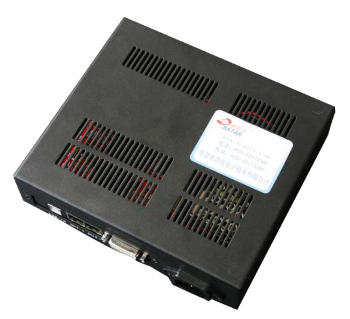 As a Video Processor

Now some Video Processor manufacturer also providing the Video Processor which can hold the LED Controller. So the video processor can be used to connect on to the LED Screen module directly.

Similar as Video Processor, sometimes the LED controller been embedded inside the IPC.

There are a lot of synchronous LED controllers on the market. Including:

Some LED Screen manufacturers has their own LED Controllers. It's only be used on their own projects. Including:

How to control the brightness of LED Screen

Generally speaking, you need to send command to the LED Controller, make it adjust the brightness of the screen.

Each different LED controller has their own method (protocol) to do that. So to adjust the screen brightness you need to use the software from the LED Controller manufacturer.

The auto dimming function can make the LED Screen turn more bright in the daytime, and dim at the night. Some coutries even has laws for the LED Screen must dim at night.

There are two ways usually be used to dim the screen:

Except where otherwise noted, content on this wiki is licensed under the following license: CC Attribution-Noncommercial-Share Alike 4.0 International